“Room to Read” to change the world

When I heard this word “ROOM TO READ “, I thought it must be a library. I heard this word for the first time when it was going to donate two computers to “Pawan Madhayamic Vidhalaya”, Parasi which was established by my grandmother late Pawan Devi Shrestha. She has not just established this school, but she has also written a novel called “Pratigya” quite many years ago. We did not know that she is the first Nepalese woman to write a Nepali novel from mainland Nepal. Anyway, I will be writing about her soon in my blog.

Let’s talk about Room to Read. Well, we all must have to thank Mr. John Wood for his hard work, devotion and love toward educating the world to change the world. In his book “Leaving Microsoft to Change the World” he has written about all the hard times he had to faced, why he was inspired to leave Microsoft to change the world and how happy he was when he saw his dream in reality.

Initially, he wanted to help the school in remote areas of Nepal and established this organization. But now it has become a global organization which is working towards changing the world, to educate people, to change their life style and most importantly to make their life easier through good education. Many poor people from so called 3rd country like Nepal, Vietnam and African countries are benefited by this organization.

All the good people who have donated to this organization should be proud of themselves for what they done to change the world. Mr. Wood, you are great, you are really capable of generating funds and to let people know what you really want to do with those funds. I don’t think anyone would leave an organization like Microsoft, its facilities and the big salary to create a non-profit organization like Room to Read. I think by now you have changed many people’s life like that guy Mr. Thai Bhu from Vietnam about whom you have mention in your book. 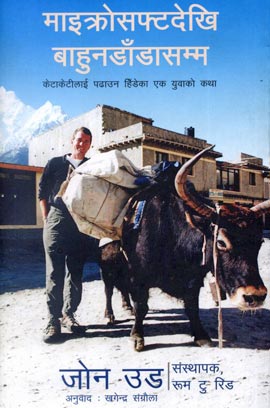 Although I have heard the name of ROOM TO READ a decade ago, I had no idea about its formation; I just knew that it is helping the schools to get computers and to create a library. When I heard about the book “Leaving Microsoft to change the world” I just heard about the book that it is a good one. Little did I know, it was related to room to read.

Again I heard about a book “Microsoft Dekhi Bahundaanda Samma.” When I heard this title, I thought it must be some guy from Microsoft who traveled to Nepal for trekking and his book was translated in Nepali. But, after I saw the cover page of the book at a local bookshop, I was stunned. I thought it is a travel log, but it happened to be about a life journey of Mr. John wood, who changed himself to change the world.

Hey guys, if you really want to know more about Room to Read and help the Nepalese kids from remote areas to get good education then please buy “Microsoft Dekhi Bahundaanda Samma” so that Nepalese Rs. 70 will be donated to Education First Movement.

Finally I would like to salute you Mr. John wood for you unselfishness, devotion and love towards education. This world really need more people like you so that we can change the world and make is better place to live.

7 Responses to ““Room to Read” to change the world”