Kartik Nach of Patan where Narsingh Dances He is back, Guess who? 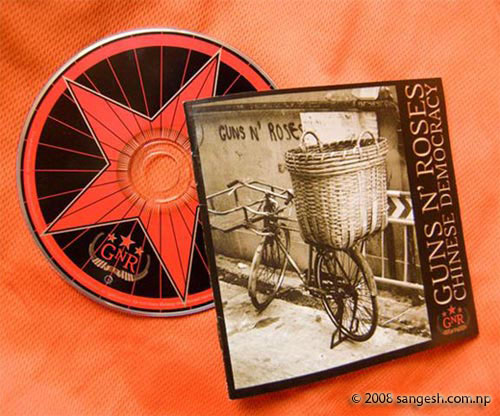 I called my friend Ashish Thapa with an excitement that I am going to get the original CD of this particular album from America which was sent to me by my brother Dhiraj. But as I called my friend, he just blew my excitement by saying he already downloaded the songs from the P2P sharing network. I was like WHAT THE HELL MAN, you downloaded this album. He even offered me the songs. I said, “No man I will listen to this album from the original CD and waited until I get it in my hand”. It took me 3 days to get the CD from my brother.

As I got the CD, my wait for this album since I ever heard about Chinese Democracy was over. I heard the song OH MY GOD which was made for this album 7 years ago when I was in Brazil and where I heard about this album, although I did not find the song OH MY GOD in this album. May be they want to hit the market by another super hit album soon in future. This is a comeback album of GN’R and I think they are really back with the same melody as of 80’s and 90’s Appetite for Destruction and Use your Illusions. I have been waiting so this type for music ever since the band was disbanded. And finally I got my taste of music in this album.

I am sure some of the songs from this album will be ever green songs by GN’R.  Songs like Better, Sorry, This I love should make it at the top of the music charts in my opinion.  The lyrics of the songs are also excellent.

Axl’s voice still rocks. The way he has sung the song IF THE WORLD is simply great. Melody of BETTER, power ballad of THIS I LOVE and SORRY and all in all G N’R type I.R.S , THERE WAS A TIME, STREET OF DREAMS and MADAGASCAR are also very good to hear to.

The cover photos of Rock Album are always a big talk and sure this album’s picture is also great. It reflects the true picture of China and gives a good judgment for the Album Chinese Democracy. A bicycle with a basket and Guns N’ Roses written on the wall.

Finally, Axl Rose and all New Guns N’ Roses member, I salute you; you guys are back in the music world to Rock the old and new generation of rock fans. It is a boost up to the Rock music; it might be an inspirational album for many new rockers and the old one who are working for their new albums. After the movie SCHOOL OF ROCK and this album of yours, I am sure ROCK WILL NEVER DIE.

Finally I want to end up saying as AC/DC says “That’s the way I wanna rock and roll” and “for those about to rock, we salute you”.

One Response to “My wait for Chinese Democracy is over”