The show must go on

It is the participation of people which preserves the culture, and in this run public of Patan are ahead. Kartik Naach is one of Patan’s unique culture. This is a performing artwhich contains some moral stories and Hindu stories and traditional music. It had begun from 12th November 2010. This festival will be celebrated till 19th November 2010. This year I am going to miss the last day of the show.

If anyone is interested to know more about this festival then you have to visit Mangal Bazaar at around 8 p.m. The last day of the show is really interesting and it makes you feel proud of being a citizen of a country which is rich in its culture. I think the world has to admit that Nepal is really a country which is rich in culture. I have been able to observe only few cultural events of the Newar community; and there are still many events celebrated at different parts of the country by different ethnic groups. 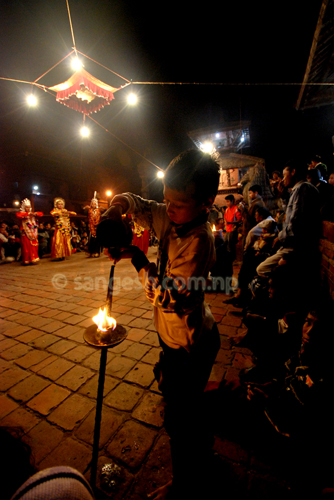 Until and unless kids participate in such events, these events will never vanish.