A long awaited journey to Annapurna Base Camp finally accomplished 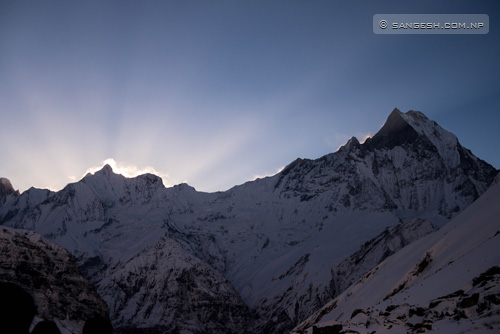 It’s been around 10 years that I have been wishing to go Annapurna Base Camp (ABC).  Even this time I was not sure if I will make it or not. I just told it to my Thai friend Mr. Thanit that I am planning to go to the base camp and I would be bringing my hunting bows, you want to join me. He said next year as he has other plans this year. But don’t know what happen to him, he later decided to join the trip with his wife. I was so excited to start this trek and waited for them to arrive in Kathmandu.

As for my friends, Nepal is an unknown destination, they just know about the high Himalayas and birth place of Lord Buddha. Even I am unaware of the trails where I am about to go for trek. We just knew that ABC is one of the most famous and easiest trek routes in Nepal. We got some good tips from my friend Mr. Akhil and Mr. Subin who have already been to ABC and they helped us to get the required gears and mentally prepare us for our trek.

We started our trek on the 7th April 2013 with one porter Mr. Purna Rai from Birethati. We hired a jeep till Siwai but there was a strike and our jeep was forced to stop at Syauli Bazar by 2 people ( I did not see any other people who came to stop our jeep ). From Syauli Bazar we started to walk and every one of us was excited. To speak the truth, Purna and me had doubt whether my friend Mr. Thanit would be able to trek. As we walked, for the first couple of hours we felt that he can do it, but might take some time more than us to reach the destination. His wife Glitzy was smooth walker. 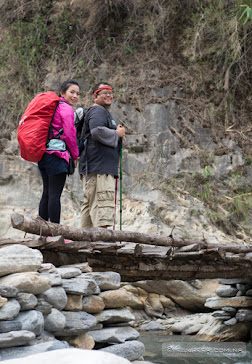 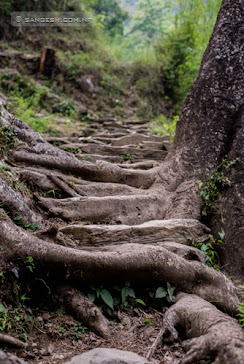 We had planned to reach till Chhomrong on first day, with this speed, but before we reached new bridge for lunch, Thanit had muscle cramp on one of his leg which reduce his walking speed. It was really a hard time for him to walk from that place.

After New bridge, the trails were just up hills and I knew it will be more difficult for a 5feet 5 inch guy who weighs 100 Kg.  Later it got difficult for me to walk with his speed as I got more tired and had to wait for him in every 10 min for another 10 min. So I just walked all alone to next destination Jhinnu Danda, this was our first night of the trek. 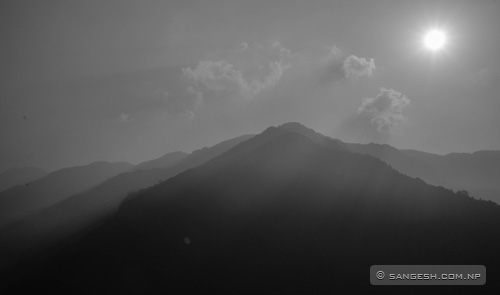 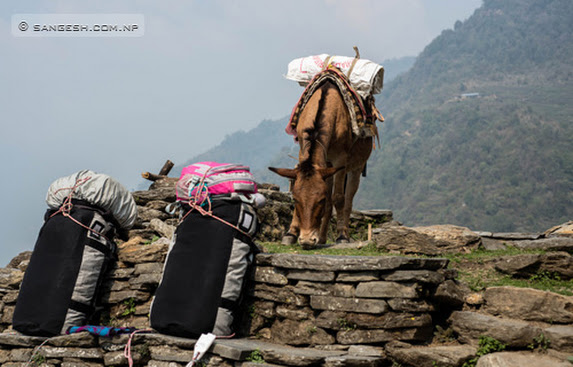 Horses are still used as means of transportation 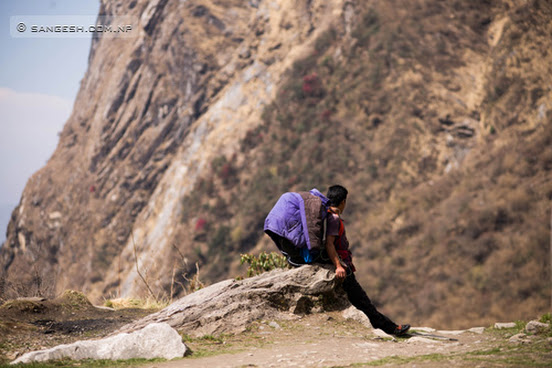 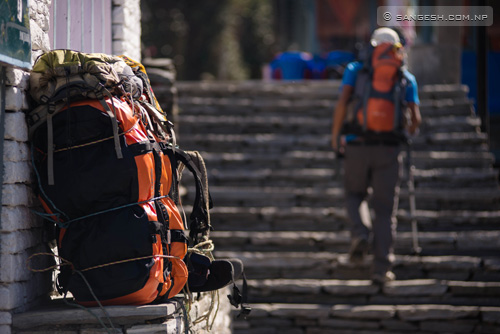 There was another problem with Thanit now, he started to get blisters on his feet, we had some medicine to take care about it. The next day we started to walk around 7 am and our plan was to reach at least Bamboo, but it was again straight up hill. For me, it took 1 hour to reach Chomrong but it took almost 2 hours for my friends.  I was sure we cannot make it beyond Sinuwa on that day.

The next stop was at Himalaya, I reach there before time but my friends arrived after sunset and it started to rain and the temperature was near 0 degree. This was the first station where we had to sleep under torch light and candle. We start our day at 5:30 from that place, I had left my friends behind and started walking towards Deurali. I was all alone walking at that time and I loved being alone as I was the only one who was enjoying the atmosphere of the morning. Sky colors changing, sun rays passing through the Himalayas and hills the music of river with vocals from the birds. I waited for my friends at Deurali for breakfast and then later headed towards Macchapuchure base camp. 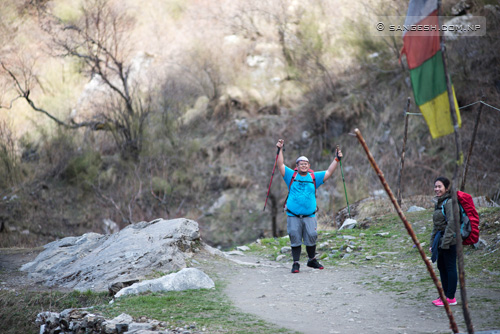 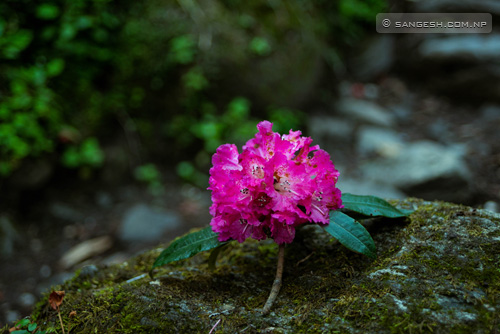 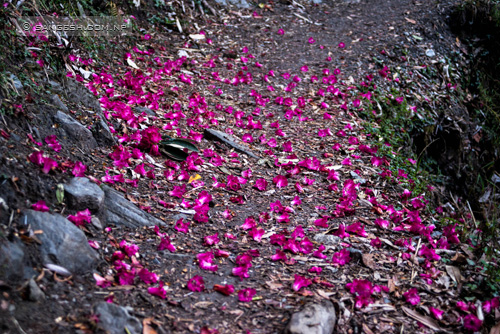 After 3 days of uphill trek, I came across some flat but rocky trails to walk and it was a fantastic route walking through the base of Macchapuchure. MBC was too cold on this day as it started to rain. I was confused what to do, as I reach here it was already mid-day. I took 1 hour rest and wanted to make it to ABC. I asked other trekkers whom I met on the trail whether my friends had arrived here by 2pm. 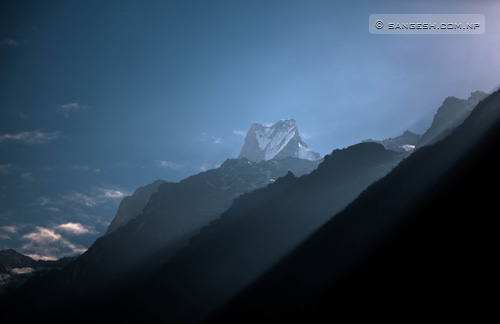 From MBC to ABC was something I was experiencing for the very first time, going above 4000 meters altitude which was really a hard task. I got my answer there to the question why mountaineers take short steps while they climb mountains. I could see ABC which seemed like 10 min walk but it took more than an hour to reach there, but once you reach there the first word would be “WOW, I made it”. It’s really an amazing experience for the first timers; you are in the middle surrounded by Mountains. 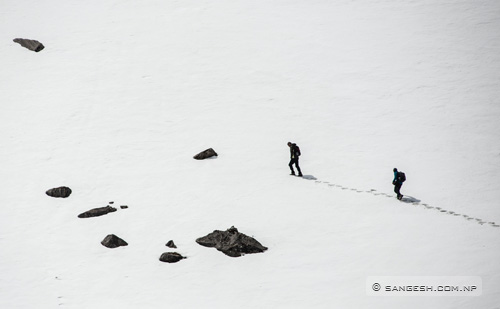 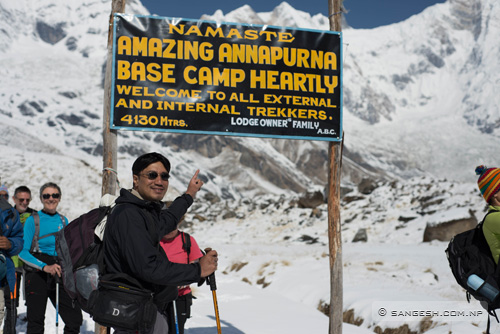 I made it to ABC

I was lucky enough to reach ABC on time as the weather get a bit bad and cloud took over the blue sky. I could see how nature was playing hide and seek with mountains. As the sun went down, we could see stars in between the clouds, thought of capturing the moments but I did not had a tripod to capture them in my camera. I thought the sky might get clearer in the morning but it got worse and could not see the sun rise as I had expected. Ohh forgot to tell you that my friends could not make it ABC that day.

It was our 5th day, I reach ABC as our plan but I had to wait my friends, I thought they will make it to ABC for the sunrise but they had other plans. Someone from other group who came early in the morning told me that my friends will start their journey at 8 am and will reach ABC by 12. At one point I got worried, as a rescue helicopter landed at ABC looking for Malaysian couple, I thought my be my porter confused about Thai and Malay so I wanted to headed back to MBC to check my friends as we didn’t have any means of communication, but I was lucky as I met a polish guy who informed me that my friends are making to ABC but it will take them more than 2 hours. Finally I was relief and prayed for clear sky for rest of the day and night. 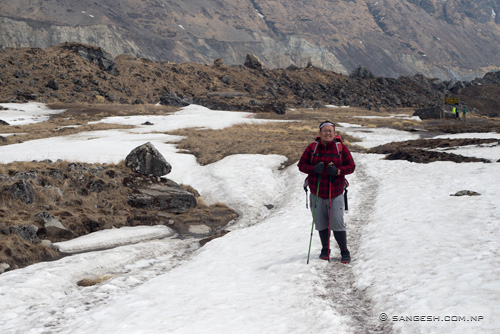 Finally I am here at ABC 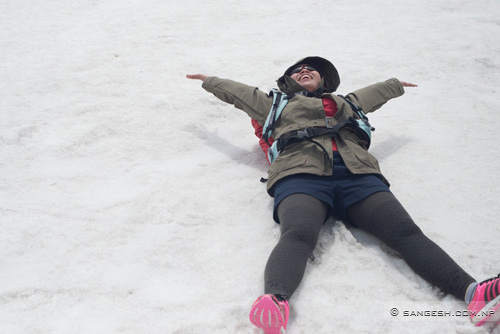 It took a while for my friend to reach ABC, I really salute his will power, he made it though it was a hard task for him. He is an example for many people who think they cannot make it to ABC. They were lucky too because after they arrived we had heavy snow fall at ABC. I felt sorry for myself for not having a good weather there for second day straight. It snowed till we went for bed. I prayed for good weather before I went to sleep and turn on my alarm at 4am to check my luck.

I was lucky, as I woke up at 4, I could see stars  and  the mountains. I said to myself “yes! this is the moment I had been waiting for”. I went to wake my friends and we carried our cameras, lens and tripod and came out of our room in freezing cold weather. Due to snow fall the previous day, everything was covered with snow and just the two of us were outside enjoying the moment. I asked myself why all these people came here? They just want to sleep at ABC and go back with a PRIDE that they made to ABC? I felt they were missing something here. As my pictures speaks, just imagine what was atmosphere had been like at that moment. 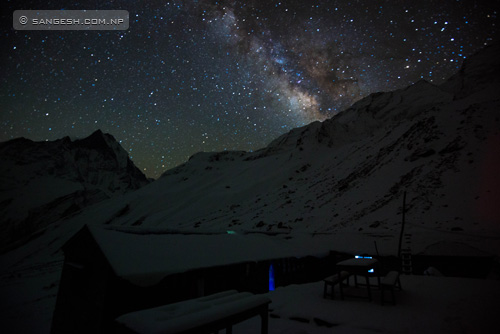 Milky Way the reason I am here 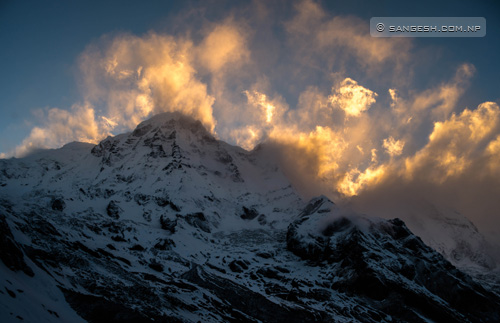 Fire in the sky

The sky was clear with stars and a white band was running, I thought this must be Milky way and took the picture. Looking at the white band and the picture of it were 2 complete different things.  In picture milky way was seen clear and I thought this is the moment I wanted to catch. It’s was not only the thing I was seeing, as the sun was rising above the horizon the colors at the same time. It felt like Sky and Mountain was changing their colors to look them self attractive.

Returning back to Pokhara for me was easier than ascending to ABC, I could have made it in 2 days, but I can’t run from my responsibilities as I had to wait for my friend. It took 3 days for us to reach pokhara from ABC. On the last day of the trek, I had some family reunion at pokhara so I to speed up myself and reach pokhara by 5 pm. For my friends since they had 4 more days to go back to Thailand, they wanted to be pokhara on same day anyhow. I have to thank Purna bhai here as with his help they reach pokhara at 10pm.

At last, this trip became one of the most unforgettable one, we experienced rain, snow, wind and heat all in one trek. It was hard but breath taking scenario made out trek easy. We really need to thank our Purna bhai for all his help as he encourages my friends so that they could make it to ABC. I thought of abandoning our trek in middle as I was felt Thanit was having hard time due to blister on his foot and pain at knee joint, but I need to salute him for this will power which help him to get to ABC without any problem. 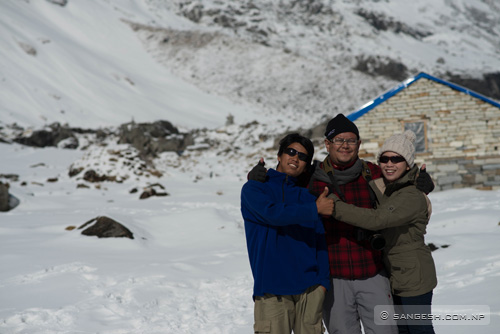 Without Purna this trip would have been more hard

Deurali, on the way to ABC

From MBC to ABC