When FIFA announced the goal projects for Nepal, I had thoughts that Nepal’s football will just turn upside down in a blink of an eye. That was what my initial thoughts and Mr. Ganesh Thapa was the president of ANFA. I had some crazy thoughts after that, at least Nepal will be a powerhouse of South Asia in a decade or so as I felt Nepalese love football more than any other south Asian country besides Bangladesh.

END_OF_DOCUMENT_TOKEN_TO_BE_REPLACED

I have never played in club-level football tourneys but I have been familiar with Nepalese football since my childhood. The passion is still there. I still play futsal with my old friends now and then. As I was growing up, I used to go to Dashrath Stadium to watch games. Those days were something else. Stadium used to be full of spectators back then. I still remember some unforgettable moments of Nepalese football.

END_OF_DOCUMENT_TOKEN_TO_BE_REPLACED

The pain of having overconfident Prime Ministers

END_OF_DOCUMENT_TOKEN_TO_BE_REPLACED

Bouddha is the first monument that has been renovated after it was damaged by 2015 Earthquake. This monument is listed as a world heritage site by UNESCO.

END_OF_DOCUMENT_TOKEN_TO_BE_REPLACED

Hand in Hand We Stand (Photo from Omar Havana) @ rubble of kasthamandap
It was Saturday morning, as I woke up the morning was not usual, it was not just me but many people felt that it was so gloomy. Dad was planning to go outside with his friend and his daughter on motorbike to harisiddhi for some work. He did mention that morning before leaving home why the weather is not good.

END_OF_DOCUMENT_TOKEN_TO_BE_REPLACED

A story of a Victim of earthquake from Lele

Earthquake Victim telling his story, at background his empty land where he used to have two story house

Lele is a small village south to Kathmandu valley. Many years ago during the Maoist insurgency I had gone there with my friends, but since Maoist activities were at high at that time, we were not able to explore the place.

After many years, I planned to go there for some photography with my friends. From the Lele bus park, we headed towards south and climbed a small hill where there was a small settlement of roughly 12 to 15 house.

END_OF_DOCUMENT_TOKEN_TO_BE_REPLACED 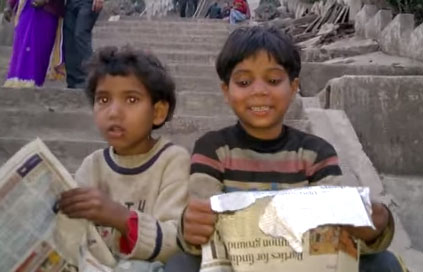 Today I went to Swayambhunath temple for some photography. It is one of the popular destination for tourist and a holy place for Hindu and Buddhist followers. One of the common thing that we see in temples of Nepal is beggars and now a days we see lots of beggars from India begging.

As I was returning, I saw some beggars on the stairs, two of the lady were breast feeding the small baby. There were few others kids too who were playing and 2 of these kids caught my eye. They had a piece of newspaper and they were mumbling. At first I thought they were reading some words from the newspaper, but when I had a close look that the paper it was upside down.

I felt bad when I saw this incident, I don’t care about they are from India or Nepal, but the rights of any children to go to school and study should be protected. Wish some organization working on children should take some action on such matter.

The video is here.