From BBC “Time” by Pink Floyd: the most inspirational Lyric

Who is responsible for these kids’ bad habits?

Today August 6th 2007, I was on my way back home from teku, I saw few kids near Machali Paati smoking, that scene really made me stop my bike. I was watching their activities. It was really amazing to watch them smoking that way. It seems like they have been introduce to smoking habit for long time. I could not see any fear in their face, they looked so relaxed. They were in their own world, having fun with each other making fun of each others, joking and laughing, and giving a pose for the camera while they continued to smoke. 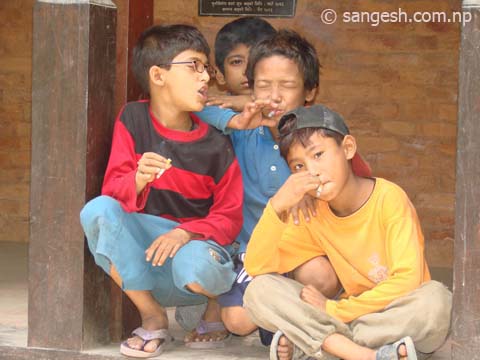 Boys giving pose while they smoking

When my camera focused on them, they saw me and they were more excited to get captured by my camera. They started giving different pose and started to smoke in different style, same time one of the guy spoke out, “dai (brother in nepali), will you give us some money if we allow you to take more of our picture”. I said ok, so they ran towards me and started asking me to give them some money.
Who is to blame for their such actions?

Young boys posing for the camera while they smoke

At first I thought they were street children, I have seen such street children smoking from the used cigarette which people throw away, but the shocking part was that all these boys had new cigarette stick and it seems that they just lit the cigarette. The way they were dressed didn’t look like if they were street child. I asked them what they will do with the money I give them; they simply replied that they will eat something. I crossed questioned them, aren’t you going to buy new cigarette from that money, they just stayed silent. Among them, one of the guys said just give me and I don’t smoke too, and other three boys said, they don’t lie and try to be innocent in front of him.


I wanted to know more about them; I asked them what they do. The reply was so simple we study in school. I just could not hold my emotions, and felt like slapping them but I did not take that step. My second question to them was how old are you? They said as if they are adults, in a proud voice 12, 14, 12, 13. I asked them in which grade do they study, 3 of them were in grade 3 and 1 on grade 4. I just felt sorry for them, for their parents and their school teachers. My final question to them was who taught them to smoke and they simply said “guys who stays there”, that mean they just learn from watching elder boys smoking. I said to them that their picture will be published in newspaper. They were so excited and asked me when, I said tomorrow. Later I did not gave them any money, I felt they might miss use it and buy some more cigarette. I felt like buy them some biscuits by myself and give and ask them to quit smoking, but my heart did not give me that permission. I said to myself that they were not going to quit smoking from my words; they need a proper guidance from their family, teacher and the local people from where they belong to.

Here are few questions that arise from this incident.

When I was in school, on non-smoking day each year our school used to have different programs for the awareness. I don’t know how many of my friends did not smoke after such awareness programs but I have never smoked till now because it was the effect on me from my participation on such awareness programs. I was and I am aware of the long term effect of smoking.

SMOKING IS INJURIOUS TO HEALTH, so quit smoking.

8 Responses to “Who is responsible for these kids’ bad habits?”